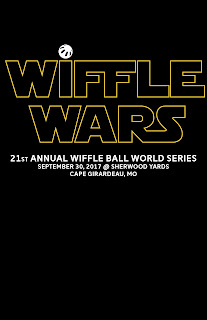 What a beautiful weekend it was for the 21st Annual #WBWS held at Sherwood Yards and Dixie Land Field. Top to bottom, this was one of the most competitive tournaments in recent memory with plenty of veteran teams in the field and a number of new ones. One of the more exciting teams in this year's tournament was the Pro Pearl Punishers. The blend of youth, exuberance, and talent led Triple P to fare quite well in their 1st year in the big tourney as they won a ballgame and came very, very close to upending 2 other quality teams...one being last year and this year's runner up. As the tournament grows older and older, one thing is certain...there is a youth movement happening and the players that played on Triple P are the future of the tournament. After all the donuts and other empty alcoholic calories, one team stood standing and was able to hoist the coveted #WBWS trophy. The Diablos remained a viable threat and contender as they won their 4th in a row and 8th title overall against another gutsy effort from team SEMO Sasquatch. It was a tight ballgame that could have gone either way but the Diablos found a way to win and keep the mystique going for this incredibly old and overweight team. A big, big thanks to our sponsors and everyone who attended and helped us make a sizable donation to St. Jude Children's Research Hospital. Final numbers aren't in but the tournament was able to raise at least $1,500.00 to help fight childhood cancer. Not bad for a backyard wiffle ball tournament!!! El Conquistador has re-evaluated his decision to end the tournament and will forge ahead as long as he's able to continue the tradition of the #WBWS. Look forward to seeing everyone next September for the 22nd Annual #WBWS @ historic Sherwood Yards and Dixie Land Field!!!
Posted by El Conquistador at 9:35 AM 1 comment:

Posted by El Conquistador at 8:59 AM No comments: