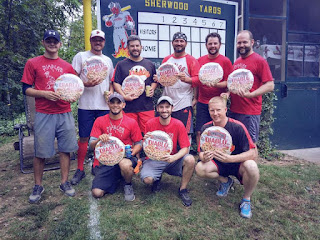 Different year, same result. The Diablos were able to walk away with their 6th overall WBWS championship as they beat the Lower Companion Darkside Monkeys in a well played, tight ballgame, 15-10. The Monkeys made big headway this year landing in the title game for the 1st time in the tournament's 19 year history. This was the 15th title game appearance for the Diablos. With their 6th title, the Diablos were able to repeat as champions and look to make it 3 in a row in what is rumored to be the last WBWS ever to be played. More impressive than the Diablos win was the participation and generosity of players and fans who donated during the tournament which helped raise $1082.00 for the kids of St. Jude Children's Research Hospital. Thanks again for coming out and we'll see you one more time next year!
Posted by El Conquistador at 9:24 AM