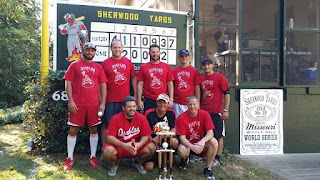 For the first time in 4 years the Diablos were back in the title game. For the first time in 8 years they're able to call themselves champions of the wiffle world again. The Rusty Ducks, appearing in their second straight championship game, fell 25-5 to the now 5 time champion Diablos to earn a solid 2nd place finish at this years 18th Annual WBWS at historic Sherwood Yards. Everything seemed to be clicking for the Diablos in 2014....who outscored opponents 98-37 and went unscathed at 5-0 to earn the crown. Led by strong pitching, solid defense and plenty of firepower throughout the lineup, this 2014 Diablo outfit was going to be a tough out for any team. The Diablos appear to have everyone back for a possible repeat in 2015 although the entire roster is looking for an extension and higher salaries, bonuses, etc. after the strong showing this year leading to the potential for some hold outs when spring training arrives next season. El Conquistador wants to thank everyone who came out and participated & donated during WBWS weekend. The players, the fans and Mike and Bev have all helped make this event a huge success and a strong fundraiser for St. Jude's Children's Research Hospital. Although final numbers aren't in...early figures are that over $700.00 will have been raised over the weekend. That's over double from 2013!!! Stay tuned for the latest wiffle happenings right here and look forward to seeing everyone at the 19th Annual WBWS next year!!!
Posted by El Conquistador at 8:29 AM