As was reported earlier yesterday, in a shocking yet ultra clever and maniacal move, El Conquistador has landed the biggest wiffle free agent on the market in Ross Bennett. Bennett will don the devil red for the 2014 tourney campaign after wanting to test free agency after learning the Honey Badgers would not be making a tourney run this year. Bennett and the Diablos have common ground in that last year's tournament ended in early disappointment for both. Says El Conquistador "Hell yes I'm mad...and I'm not going to take it anymore. If you think we're all about beer and doughnuts, you're sadly mistaken. We were raging that there were no jalapenos to go with the f@#$ing nachos last year. Look, everyone knows RB's talents, and now we know he's taking his talents to the Diablos...unquestionably the most storied franchise in wiffle ball. Love us or hate us, and for the majority it's the latter, we go after the best. And when the best are available, you make a move. Now get the camera out of my face fu%^wad". Team Stag appeared to have its panties in a wad over the move and called it "desperate". Bennett looks to become only the 2nd player in WBWS history to win the crown with two different franchises as Stag 1B Ty Spaeth became the first to win 2 championships...one with Stag last year and one previously with the Diablos. Bennett seems excited to make a run at the 2014 crown with his new teammates as indicated in the accompanying press release below: 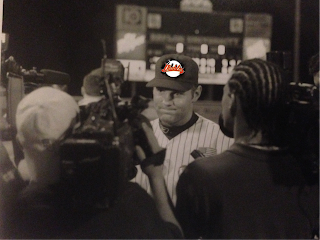 CAPE GIRARDEAU, Mo.-- After hours of intense negotiations, the Diablos and LH/LHP Ross Bennett have agreed in principle on a new deal. The deal sends Bennett from the 2011 Wiffle Ball World Series Champion Honey Badgers to the 4-time champion Diablos. Honey Badgers GM, Nathan McGuire, was unavailable for comment due to coaching 11 youth select teams this Summer. Bennett, pictured below sporting his new Diablos hat, spoke to the media including Diablos Beat Reporter Calvin Broadus aka Snoop Dogg (also pictured below). "First off, I'd like to thank the Honey Badgers for giving me the opportunity to play the last few years. The 2011 squad with Nathan McGuire and J.Y. Miller was a special team to be a part of. Unfortunately, without McGuire and Miller present, our team struggled both offensively and defensively this past season. I cherish the relationships from that team and continue to remain good friends off the field with that squad. Our legacy will always remain on the wooden championship board on Sherwood. However, at this time, joining the Diablos feels like the best career move for myself and my family. We all know its every wiffle toddlers dream to grow up and don the devilish red and black of the Diablos. Their lineup is solid top to bottom and their team defense is second to none in the tourney. I know I'll be protected offensively and if I'm called upon to pitch, I'll have playmakers at every position on defense." Prior to joining the Diablos, Bennett must pass a team physical. The physical is multi-faceted but emphasizes an ability to perform at high level while consuming a large quantity of adult beverages. Other details of the contract were unknown although reports indicate Bennett will receive upwards of 3 regular glazed doughnuts on Playoff Sunday and access to the Augustine's liquor vault for the two day tourney. Diablos GM Jeff Augustine will meet with the media Friday morning.
Posted by El Conquistador at 4:03 PM

The no team with Graham Andrews clause was hysterical!! I'm truly flattered! I'll see you girls at Sherwood with a mostly new squad. I look forward to Kenny striking out your over priced acquisition.

Ross Bennett is definitely taking a risk here but I trust his judgement.
Hopefully things turn out well for the Diablos AND Ross Bennett this time.